When It Comes to Teaching the Voting Rights Act, this Professor Literally Wrote the Book 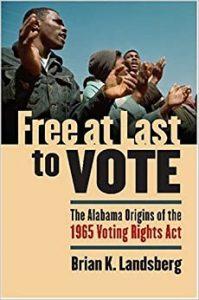 This year is the 55th anniversary of the Voting Rights Act, and it comes with many reminders of the complex state of voting rights and election law in the U.S. The Covid-19 pandemic has complicated the logistics of voter registration and elections. A June report from the nonpartisan Center for Election Innovation and Research shows a significant decline in new voter registration numbers compared to the months leading up to the last presidential election in 2016. This summer the American Bar Association’s Human Rights Magazine devoted two issues to voting rights, including discussions of voter roll purges, racial gerrymandering, and cybersecurity issues and concerns.

Against this backdrop, we spoke recently with McGeorge Professor Emeritus Brian Landsberg about the election law course he co-teaches with Professor Mary-Beth Moylan. The course is part of McGeorge’s online Masters in Government Law & Policy.

Professor Landsberg’s teaching is grounded in his experience as an attorney in the Civil Rights Division of the United States Department of Justice, beginning in the tumultuous 1960s. At that time Landsberg was based in Alabama, helping to litigate cases involving the denial of the right to register to vote.

“I was in Selma on the day called ‘Bloody Sunday,’” Landsberg says, “when state troopers and sheriff’s deputies attacked people who were marching from Selma to Montgomery to protest the denial of the right to vote.” “And that,” Landsberg continues, “led to the adoption of the Voting Rights Act, and I worked on cases to enforce it.” In his role as a lawyer in the U.S. Department of Justice Civil Rights Division, Landsberg explains, “my first responsibilities were to help litigate cases involving the denial of the right to register to vote in Alabama.”

“The first of those two weeks,” Landsberg explains, “focus on what were called the special provisions of the Act. The special provisions targeted states that have a history of denying the right to vote based on race.” “In those states,” Landsberg continues, “the Attorney General of the U.S. could appoint people to register voters where the local registrars refused to register them to vote. The Attorney General could send observers to the polling places to make sure elections were fairly run. And, if a state wanted to change its voting laws, the Attorney General could review the changes because the state had to prove that the change would not have the purpose or effect of discriminating based on race. The course goes over these special provisions in great detail.”

After spending a week focusing on the special provisions of the Act focused on certain states, Landsberg says students spend another week studying the section of the Voting Rights Act that applies nationally. “This part of the Act,” says Landsberg, says that “states may not apply any voting standard or practice that has the result of discriminating based on race.”

Other topics in the McGeorge election law course include racial and political gerrymandering, constitutional principles, election administration, and major and minor political parties. Issues of campaign finance, bribery, and public financing of elections are also addressed.

The Voting Rights Act is incredibly relevant today, says Landsberg. Its provisions speak to questions the public raises about voter suppression, voter fraud, mail-in voting, early voting, and polling places. The course and the grounding it provides in voting rights is useful to all students of government law and policy, and especially useful to students working in government agencies, with campaigns, or who are otherwise engaged with elections.

McGeorge’s Master in Government Law & Policy degree is a fully online graduate program designed for people interested in a deep dive in government law and policy but who do not need a JD to achieve their career goals. The Master of Science in Law (MSL) is earned through a convenient part-time, online program, specifically designed for students and professionals who need flexibility due to work, professional, or other obligations and who want to further their education and advance their career.